The concept of building a brand is not new. In fact, the first branding effort may be the most successful in the history of the world.

As told by Walter B. Denny, distinguished professor of art history at the University of Massachusetts, Amherst, the Ottoman empire set itself apart not just by conquer 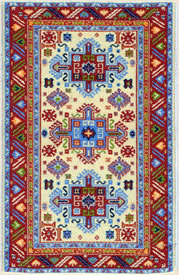 ing kingdoms in Europe, Asia and Africa and ruling for 700 years, but by the style it established — and for which it is still known.

I heard Denny speak at a seminar at the Textile Museum Associates of Southern California. His talk was “Ottoman by Design: Branding an Empire via Floral Design in Carpets and Textiles.”

Flowers were important in Ottoman art, mostly the influence of an artist whose name was Kara Memi. He invented a new style that appealed to the royal court. It became integrated into every facet of life in the empire — ceramic, building, fabric and the carpets for which Turkey is still famous. His work allowed the culture to establish itself as separate from the other cultural powers, particularly Italy, which had been sending its silks and other luxuries to Constantinople up to that point.

Kara Memi’s great insight was the tulip, which became identified with the Ottomans and is still the image that evokes the empire. Pull up a page on Ottoman art today and you will see the tulip. He also incorporated a handf
ul of other flowers in his design: hyacinth, carnation, honeysuckle, rose and rosebud. As it turns out, Denny said, one of the keys to the brand durability was its flexibility. Artisans across the Ottoman lands began copying Kara Memi, but with their own stylizing. Women weaving in small villages who had never seen these flowers, passed skills to their daughters and granddaughters. The living work began to be exported. Russian weavers were the first to pick up the designs outside the empire.

As Denny said, Ottoman floral art became the world’s first brand, following this now-recognizable pattern: First, there was the invention of the brand, followed by the diffusion throughout the empire. The third stage began when it was copied, and knockoffs appeared throughout the West and East. From the 15th to the 20th centuries, Europeans couldn’t get enough of the look, and when you saw a carpet or a ceramic tile decorated with tulips and the other floral designs, you thought Ottoman Empire, and nothing else. Given that it all began before the Industrial Revolution, Denny said, it was probably the most successful and fastest brand dissemination until Apple created the multi-colored logo with a bite missing.

With our modern ability to instantaneously connect to nearly everyone across the world, it isn’t as difficult any more to create a brand that might go viral. Instead, as our attention spans shorten to 140 characters or less, the magic today is to make it last several centuries.