The only thing I recall from a television interview I half-watched one day was a question about who the person being featured might like to invite to lunch, if she could choose among 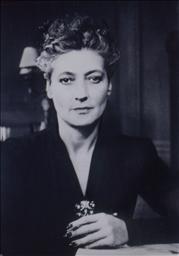 anyone from the present or from history. I stopped paying attention to the show and for some time I pondered whom I would seek out. Finally it occurred to me with an aha! Suzanne Belperron.

Belperron was a jewelry designer in France, wildly popular among socialites, movie stars and royalty in the 1930s and 40s. Her work was regularly featured in Vogue and Harper’s Bazaar. And then she was largely forgotten until the 1987 sale of the Duchess of Windsor’s jewelry collection, which featured more than a dozen Belperron pieces.

Belperron’s rediscovery brought a new appreciation of the voluptuous luxury of her pieces, so different than anything else produced in that time. Her work attracted me (and I noted that we share the same initials) but her style and approach fascinated me, too. She was an artist and a businesswoman when that was rare, so she must have been tough. She was definitely stubborn and opinionated – and it worked to her benefit.

Today, although she died in 1983, Belperron’s designs are being recreated by Ward Landrigan, the former head of Sotheby’s Jewelry and owner of Verdura in New York. He purchased her archive of designs in 1998 and is producing exact replicas of the originals. Articles are again being written – from The New York Times to Architectural Digest – about Belperron and her collection. She is regularly described as one of the 20th century’s greatest jewelers.

I decided Madame Belperron might enjoy the food of her country, so I invited her to join me at a small bistro that I like near my home. She readily accepted and when she arrived, I recognized her at once. She shared features with many of her haute couture clients: prominent cheekbones, an unerring gaze, long fingers and a slim figure. She wore her dark hair pulled back and a brooch rested at the point of the neckline of her silk dress, which as was her custom, was black.

We ordered mineral water and she complimented the waiter, Michel, on his clean, white apron.

I had many questions but didn’t want to miss anything, so I began with her childhood in a small town in eastern France.

Question: Would you tell me about your early years in Saint-Claude?

Answer: It is near the border with Switzerland and it is quite beautiful there, but it held little interest for me. I spent much of my time indoors reading and drawing. My father was a merchant and the economy never seemed to treat us well. We were poor. My mother, bless her, recognized some talent in me and when I was 19 she sent me off at great expense to the École des Beaux-Arts hours away from home. I never returned to Saint-Claude, really. I am of the opinion that I would have found success some other way, but if my mother had not sent me off, it would have been much more difficult.

We perused the menu as we continued to talk.

Q: Did the school recognize your talents?

A: Well, I did work very hard. I wouldn’t say I fully realized my vision at that time – I copied the vogue; art deco was terrifically popular, but I had an eye for color and detail that most of the other students didn’t possess. And I practiced and practiced. I realized that I wanted jewelry design to be my life. I believed I had something to say, even though I didn’t truly find my unique voice for several years. I had to work at that, too.

Q: You went to work in Paris for Rene Boivin, the father of one of your fellow students and founder of his own design house. Did you consider that your big break?

A: For a while I did, and I worked there for several years, but I was frustrated after a time. Everything was Art Deco. I showed the director drawings of some ideas I had and he was dismissive. I did not appreciate that. I was the assistant director, after all.

Q: Do you think it was because you were a woman?

A: What else could it be? I was much more talented than he. It sounds as if I am bragging, but does anyone remember his name today?

Michel returned and Belperron’s expression changed from stern to charmed. She ordered trout almandine, after asking whether the fish was fresh that morning. A plate of cheeses and a salad are included, correct? Yes.

Q: You came to a turning point in your career when you left Maison René Boivin and joined Bernard Herz. Can you tell me about that?

A: You are quite correct that it was a turning point. I joined Bernard because from the beginning he allowed me – or rather he agreed with me that I should have full artistic control of my work. Yes, he encouraged me, and it worked out well for both of us. I liked that. Working anonyomously was stifling. Having a director tell me what was good and what wasn’t was stifling.

Q: That was when you became famous, and rather quickly. Your work was recognized as unique.

A: I was happy to finally express myself in my work. Happily, people sought it out and purchased it.

The trout arrived (I had ordered the same) and with the main course we dove into discussion of her art. She seemed relaxed, which I was happy about, because difficult subjects were ahead. But not immediately.

Q: Your work was different because of the design but also for your methods. More often than not you used semi-precious stones and when you did incorporate diamonds or other precious stones, they weren’t of the highest quality. What was your intention?

A: I wanted people to look at the art, the design. I wanted to show that the quality of the stone in the traditional sense was no longer the star here. I chose stones for their color and for how they fit into the piece as a whole. People talked quite a bit when I matched a piece of rock crystal with a sapphire.

She chuckled a bit and said she was pleased with the fish.

My jewelry is not shy. It is bold. You know it’s there. Your eye is drawn to it. Yet it is about nature. I like the sensuality of nature and people saw that, or sensed it. Some people called my work barbaric. Why do you think they used that word? Is it because the sensuality suggested the forbidden? Not everyone could, or would, wear my work. The old ladies didn’t like it as much. My audience was younger, more up-and-coming, willing to try something new. The rings, especially, were unique. I had a single large bit of chalcedony carved into a bulbous ring, with another stone set on top. No one had seen anything like it! Rich colors, natural lines. Not the rigidity of Art Deco.

Q: I’ve read that you would work very closely with a woman to create a piece just for her. True?

A: I never compromised on the design. But I would discuss with her the tone, the color of the stone. I kept records of my customers, the size of their fingers, the color of their eyes so that each piece was for only one person. Every piece I made was different.

Q: It occurs to me that you were an excellent marketer, as well. I think of your answer when asked why you didn’t sign your work: You are quoted often as saying “My style is my signature.” Did you say that?

A: Yes, of course. It’s a conceit, isn’t it? And confidence. And mystery. It’s a joke on those who are not sophisticated enough to tell my work from the designs of others. Mine is superior, of course, and isn’t it obvious?

Our salads were delivered to the table and she struck up another conversation with Michel. She smiled often and I realized now was the time to ask the question about the years of WWII, when her partner Herz was imprisoned and killed by the Nazis. Belperron continued to run the shop under her name and stayed throughout the war, refusing offers from design houses in the U.S. to join them.

Q: I just can’t imagine staying in France during the war. I’ve read that you had offers to go to America to work but you stayed for whatever reason, even after Mr. Herz was taken away. It has raised so many questions.

She looked at me with a sense of weariness.

A: People accuse me of being a collaborator – the greatest insult. The Nazis were vicious and horrible. I did not stay because I liked them. I stayed because France was my home and I never changed my mind. My stubbornness is admired in my jewelry but criticized in my politics. Of course, I would not characterize my decision as politics. Just a will to stay in France. As you know, after the war I became partners with Bernard’s son and we continued the business until 1974. I was very happy when the French government awarded me the Legion of Honor in 1963. I felt justified. One may speculate, but a collaborator does not earn the Legion of Honor.

A: I don’t deny it; meeting royalty is a memorable experience. The Duke of Windsor was sophisticated and debonair. I loved working with both the duke and duchess. My favorite piece for her was a moon-shaped compact covered with gemstones. On the back was an engraved map of her travels. Very personal. I had been famous for some time, but that brought things to a new level in my mind. I think also of some of the others you may have heard about. Gary Cooper’s wife was a client. Frank Sinatra stopped in. I met everyone in my shop – no advertising, strictly word-of-mouth.

Q: Now that your work is being reproduced, what do you think?

A: I suppose I don’t care about those who came after me. I enjoyed my success. Of course, part of my success was that I created each piece uniquely. No ring is the same as the other. It is true of the earrings and the bangles and the necklaces. Each is different. Now there will be several of each design. It is well, I’m sure, that people continue to value my work. But a box of rings that all are the same – that was not me.

Suddenly she leaned forward and held my hand in hers. I was surprised by her intimacy.

Now let me ask you a question, she said. Why are you so interested in me?

Slightly flustered, I answered: You are a strong, confident woman. You ran your business brilliantly, and with great difficulties kept to your vision. Am I accurate?

Still holding my hand, she replied: Thank you for giving me this opportunity. But to breathe the air, to talk and to have ideas! Oh, to be alive. That is what I wanted to show with my work.