I am on a journey to learn about what I will call Catalan Art Deco jewelry. Last year I bought a bracelet from the Catalan Noucentisme period, which I had not previously been aware of. Marta Alcolea, the dealer from whose Barcelona store I bought the piece started to educate me, introducing me to some of the creative forces of that period early in the 20th century, as the distinct culture of Catalan, within the confines of Spain, began to express itself. 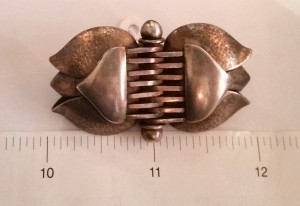 Alcolea mentioned the jeweler, silversmith and painter Jaume Mercadé I Queralt, and last September I met Monica Gaspar, the curator of what must have been a spectacular exhibit in 2005 in Barcelona: Jaume Mercadé and Art Jewellery of Catalan. She provided a catalog of the exhibit and then connected me to Mercadé’s grandson, Albert Mercadé, and I was able to converse with him via email.

Albert said he works to preserve and continue the work of his grandfather and owns pieces of jewelry, silverware and drawings from many of Jaume’s artistic periods. “If you ever come to Barcelona, I will gladly show it to you,” he said.

Albert mentioned other sites that offer work by Mercadé, including The National Museum of Catalonia MNAC and the Art Museum Valls (Tarragona), which is in Jaume’s hometown.

Albert said Jaume ranked as one of two great teachers of Catalan jewelry and art, along with Ramon Sunyer. They both worked at the school of Arts and Crafts Association of Cataloni

a in the 1920s. Their work was represented in the 2007 exhibition “Barcelona and Modernity: Gaudi to Dali,” first in Cleveland and then in New York. The catalog is available on Amazon.

Jaume Mercade, who lived from 1889 to 1967, was recognized for his talent, Albert said, at the International Exhibition in Paris in 1925, the Grand Prix at the Milan Triennale in 1942 and 1951, and the Bienal de Arte Hispanoamericano in 1955.

The family tradition of upholding Jaume’s work continues, Albert told me. “My eldest son, Albert Mercadé Ciutat, historian, art critic and director of the Foundation of the painter Arranz Bravo, is also a connoisseur of the work of Jaume Mercadé.”

I thanked Albert for his information, and as I told him, I can’t wait to dive into my homework.